THE COMPILATION BELOW WAS RECORDED LIVE AT A NIGHTCLUB IN PORTLAND, OREGON, IN MARCH 2013. THESE UN-EDITED CLIPS ARE A SAMPLE OF WHAT YOU MIGHT HEAR AT ANY OF OUR LIVE SHOWS. FOR MORE SAMPLES OF OUR LIVE SHOWS, PLEASE CHECK OUR VIDEO PAGE. 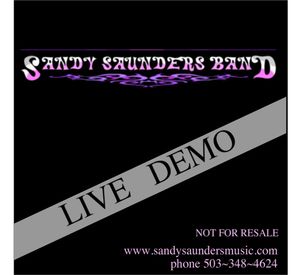 Our new C.D. is done and you could be on of the first to receive it before it hits the stores.

Get your download of Rattlesnake Road -or- buy individual songs for .99

The SANDY SAUNDERS BAND makes it easy to show your support by donating to our recording fund. The cost of recording a quality C.D. just keeps going up as the pay for musicians keeps declining. For every $15.00 donated, we will send you a free hard copy of our  C.D. "Rattlesnake Road" signed by all band members.

Simply press the 'DONATION' button to make a contribution. Thank you all for your continued support!